Our morning started early on the day of the funeral. There was a lot of activity directly below the balcony pictured below during the wake the night before. So much so that I was awaken on several occasions; there was one instance where the entire street pictured below was jammed packed with people. I was told food was served the entire time; we’re talking approximately 5AM in the morning. They enjoyed Hot Cocoa, Ginger Tea, Beer, Goat, Rice, and a host other amazing dishes. I unfortunately did not get an opportunity to photograph or partake in the events because I was extremely exhausted from my travels.

My brother and I decided to snap a few photos of one another before heading downstairs to meet up with the rest of the guys. Funeral services were being held in the Cathedral of St. Borromeo Haiti Parish Partnership, a very beautiful church which will later be displayed. People were being transported to the church by the car load; there were several drivers going back and forth to ensure everyone arrived on time. We had to move quickly in order to reserve our seat; there was an instance were we thought we were all going to fit in a car, but two ladies appeared out of no where and secured their seats which left two members of our crew driving separately. 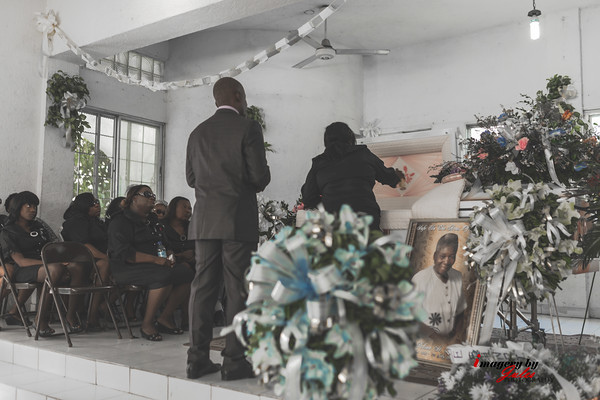 There were two services; the first was more of a viewing held in a hall labeled Salle 1, the churches’ fellowship hall. The family had an opportunity to pay their final fair well to the deceased. The atmosphere was heavy and the room filled with sorrow. The service was short; it was now time to transition to the next phase. The body would now be transported from Salle 1 to the main congregation. My brother’s grandmother’s wishes were for him and his cousin to take the lead position carrying her casket. It was time for them to take their place as they were lead off by two Alter Boys and other family members carrying the flowers to the congregation. It was a short walk, but interesting walk because the walkway way lined with merchants selling water as we exited the Salle 1. Their timing was critical and I’m sure it’s as a result of past experiences; they were well aware of what would follow after the funeral left the congregation. 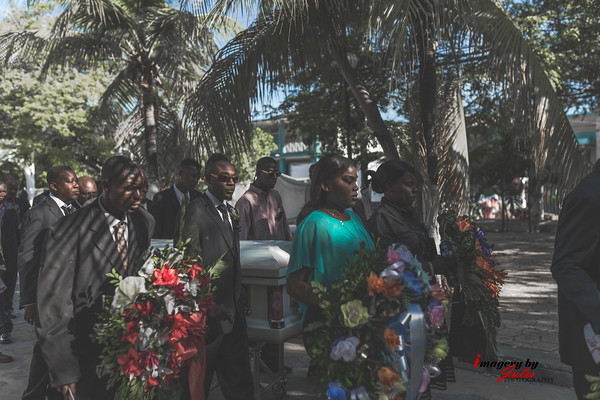 As previously mentioned, the Cathedral was beautiful. The space was vast and airy with vaulted ceilings accompanied by gorgeous antique crystal chandeliers and beautifully handcrafted stained glass windows. The service there was also short; it consisted of a few people speaking, singing and the priest giving his sermon. The priest then burnt incense around the casket, which in the Catholic faith symbolized prayer in action: it’s an expression of worship of God in words and gesture. Not only does the smoke symbolize the prayers of the faithful drifting up to heaven, incense actually creates the ambiance of heaven.  I later realized the timing of the service was intentional because there was another funeral service immediately after ours. The next part of the service was the Funeral March which was the inspiration behind to this blog. I had no idea it was going to take place and was excited to be a participant in a Jazz funeral which is a common name for a funeral tradition with music in New Orleans, Louisiana. This was a tradition of African spiritual practices, specifically the Yoruba tribe of Nigeria and other parts of West Africa. 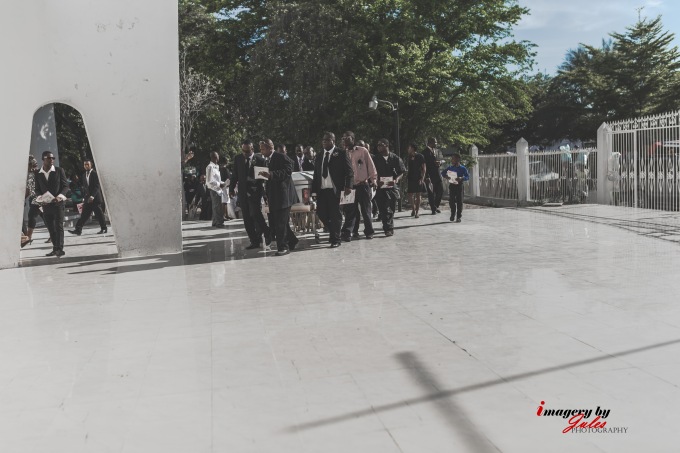 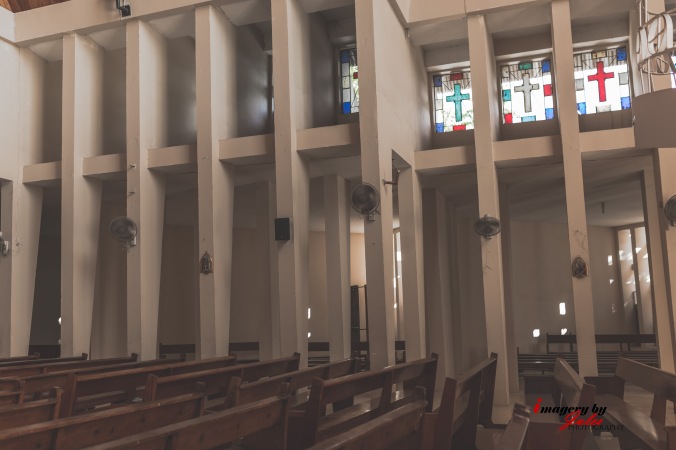 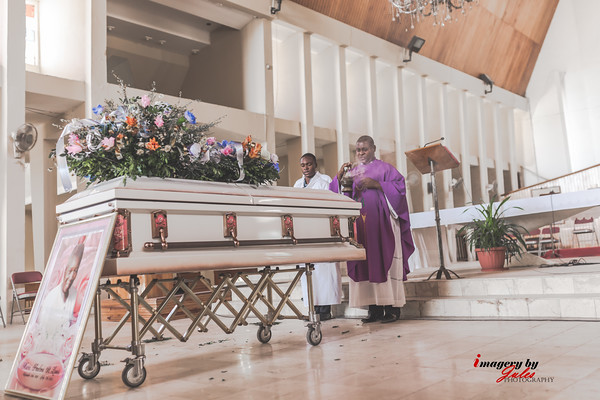 And now we march. We were once again greeted by merchants selling water as we exited the church. As previously mentioned, they were in the right place at the right time because they understood the journey ahead required hydration. The band awaited to lead us to the cemetery. Their queue to start walking and playing was the casket being placed in the hearse. The walk itself would’ve taken about ten minutes from the church to the cemetery, but consider that we did not have a Police escort to stop traffic and the fact that residents treated the day like any other business day. The funeral march was slow and steady, but heat was sweltering and almost unbearable. The merchants were amazing for the fact that they marched along with us and sold water to those in need. The view along the route of the funeral was beautiful; the mountain peaked at us at every turn. I played two roles this day; the photographer and traffic director’s assistant. We had to reroute tap-taps and motos along our route. 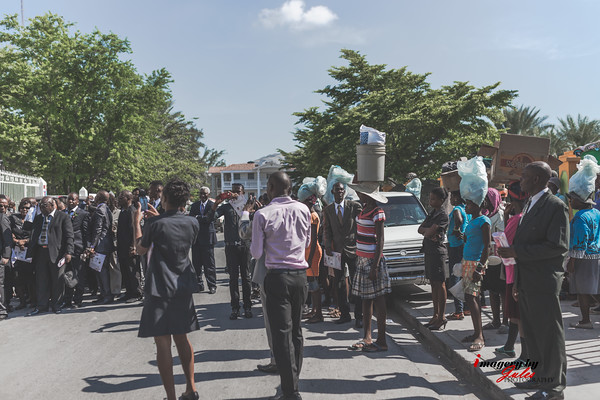 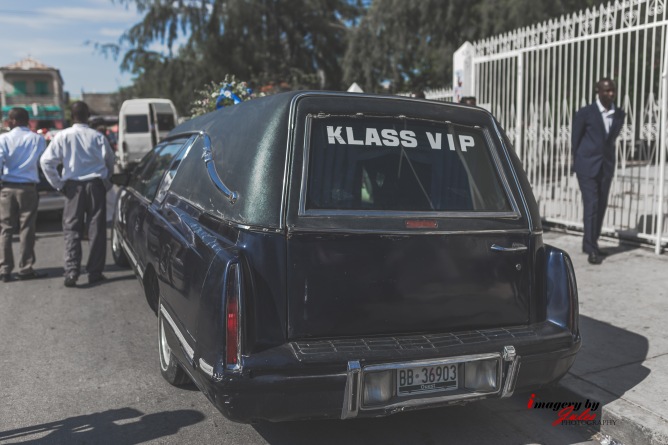 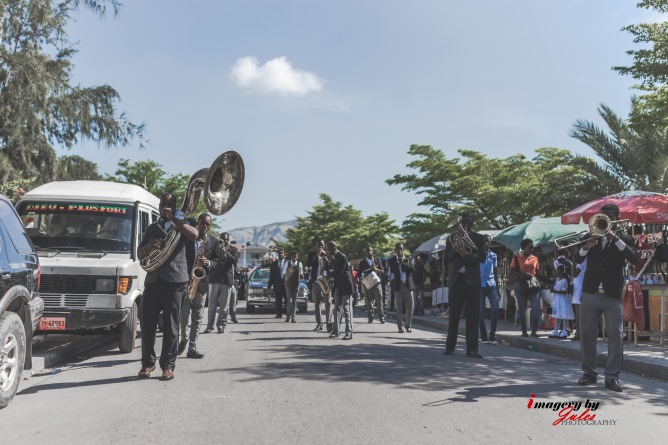 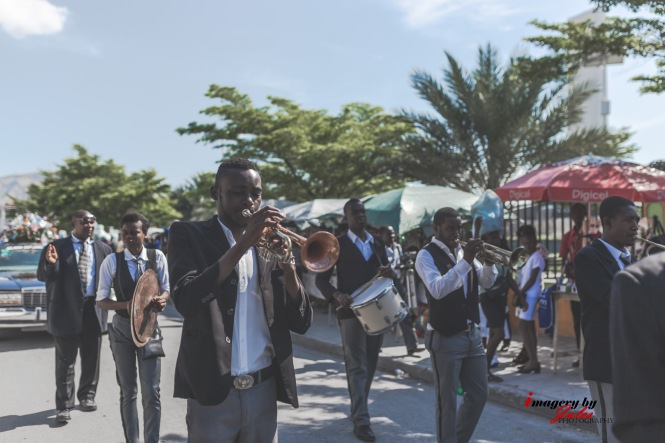 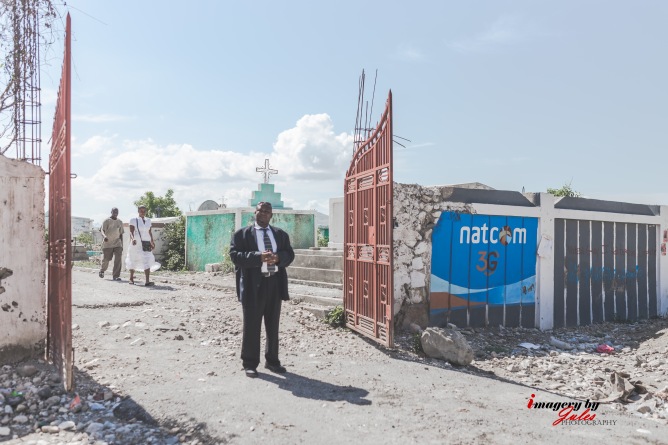 We finally made it to the entrance of the cemetery which signified, it was time to carry the casket by hand for this leg of the journey. The hearse followed carrying the flowers which eventually carried by family members. The cemetery was another beautiful site. The family had to walk the casket a good distance before arriving to the burial site. I thought their job was complete once they arrived to the grave, but there was one more task of placing the casket in the actual grave. Flowers were placed on top of and inside the gave. I thought it was really cool that the family got the opportunity to witness the grave actually being sealed off. 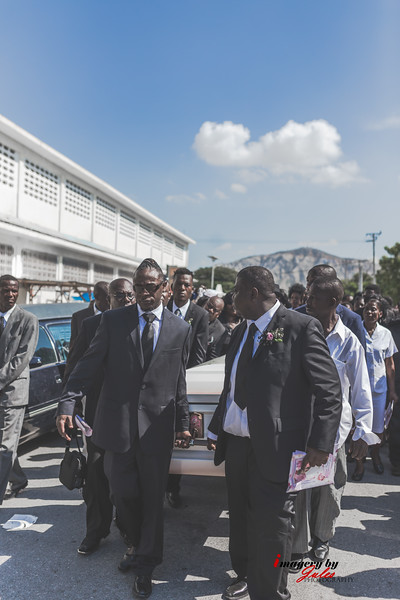 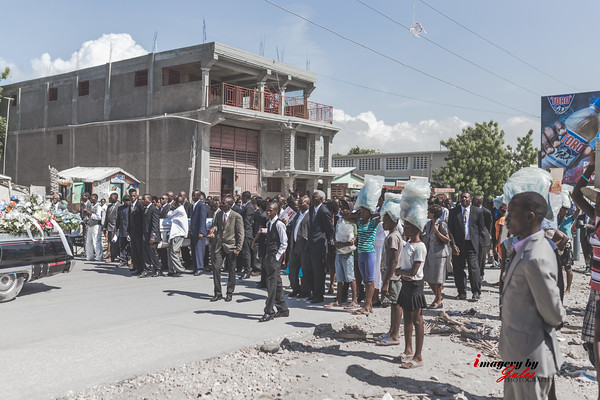 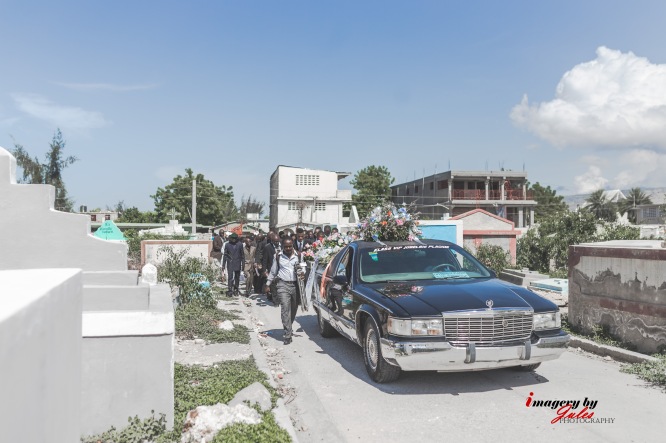 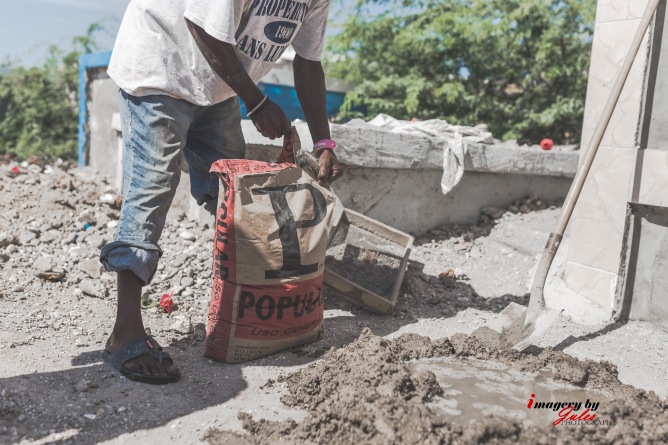 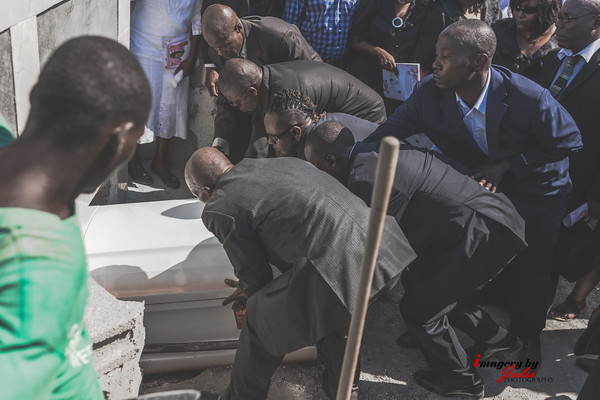 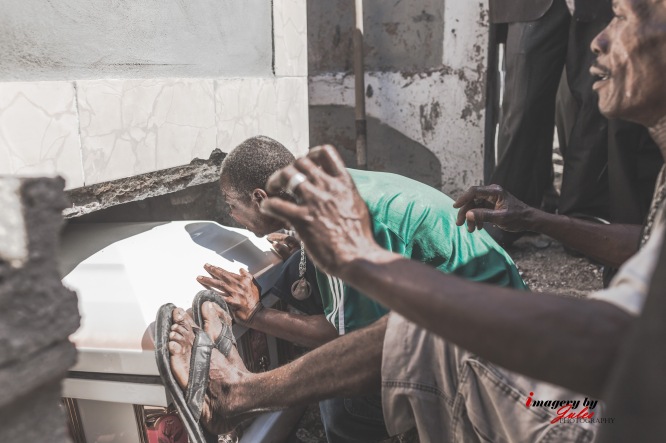 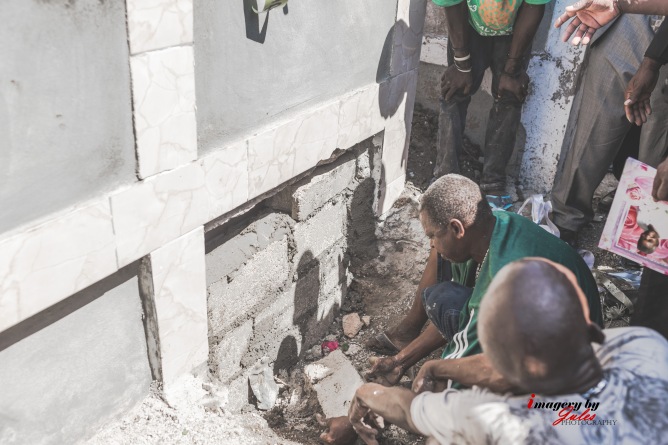 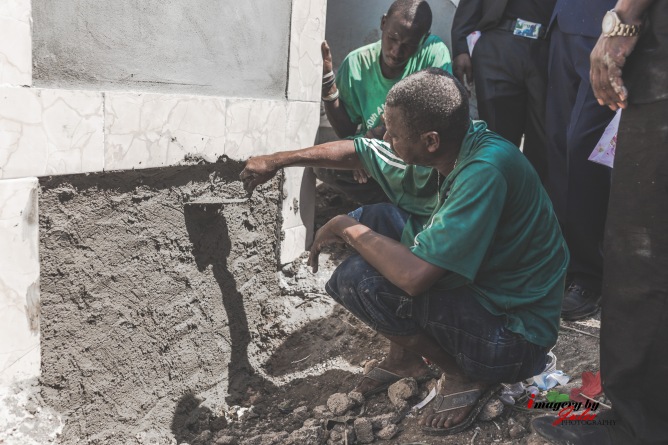 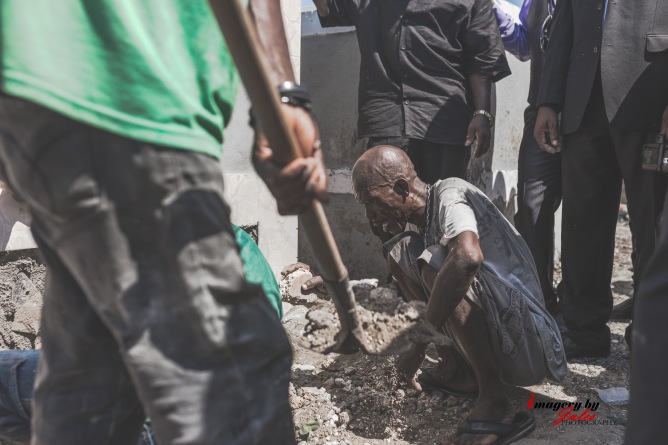 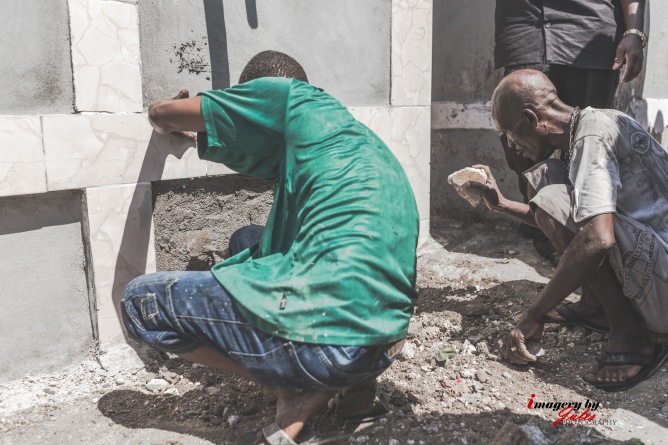 We left the cemetery and were greeted by a new set of merchants: the Motos. Their timing was critical despite the short walk back to the church. People were exhausted and wanted the fastest form of transportation. I was parched, we decided to head to a bar across the street and grab a cold pop (soda). It was the most refreshing pop I’ve ever had. Our ride picked us up at the bar and took us back to the Salle 1. Haitian patties and soda was being served, but I preferred the food awaiting at the house. 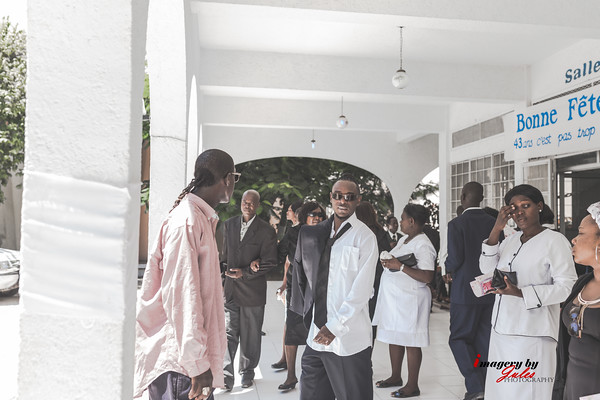 We regrouped at the Salle 1 and watched as people loaded cars in route to the house. Luckily, we were vip guest and didn’t have to eat with the general public; the second story was off limits to everyone but us. 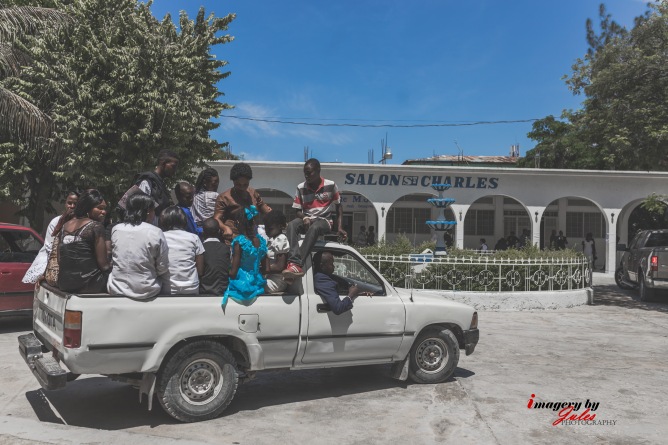 My original plans was to walk to the mountains immediately after to snap a few shots, but I was beaten by the sun all day and didn’t have the strength to carry on, plus we had to leave shortly to take the a bus back to Port-au-Prince. The problem with the timing is that it was Saturday and the elections were taking place the following day. Traffic was not permitted on the roads during elections unless it was for official reasons. Until next time: the last and final leg of this trip will be outline in the next blog. Please stay tuned.